The HP Blazing Spuds took first place in the Men's over-30 division this fall season, finishing it with a decisive 7-0 spanking of Angell's 30. Meanwhile, the Turf Football Club, who the Spuds have owned for the last two years, somehow managed to dominate Vantage Realty, 3-1 on the final Sunday. The Turf had benefited earlier in the season from a forfeit by Vantage, when the latter had failed to accurately count to two; the maximum number of players under 30 allowed in the over-30 league.

Vantage had embarrassed the Spuds on their first outing, but after that one loss, the Spuds were unbested in 7 tries -- they outscored their opponents by more than 4-1, and never gave up more than one goal to an opponent in those seven games.

The goalkeeper, Eric Grae, matured like a fine wine as the fall went on, finishing the season with a shutout. Thomas Otto and Dan Sammartino combined for 14! assists, and Otto put away 4 goals in the final weekend's two games. Max Uchida tied Otto's goal total in the two (!) games he could squeeze in before returning home to dominate the Japanese league. And John Lamken anchored a defensive line that was beyond stingy to all comers. Nicely done, boys!

Thanks to Max Uchida for the original picture.

Once upon a time, we had the HPIB team which became the Lasers. The other team was The Spuds, which has been around since forever. For a little while we had three teams, and the one in the middle was The Blaze. When the latter two were merged, The Blazing Spuds were born. 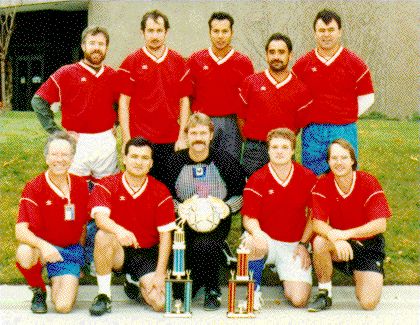 In a moment of past glory, here is most of the 1995 HP Blazing Spuds. The trophies are for 3rd place in our division, and 3rd place in the fall tournament, where we played in Men's division II, along with a couple of players from the Lasers.