The storming of the Capitol 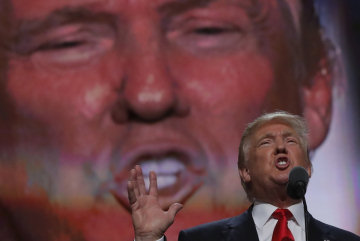 Where to start? All the way back to the 2016 Republican National Convention, and the words of the tawdry con man who had bested all comers to take the nomination, and then, most improbably, what was left of the party as well. My headline back in the day was "Down the Trump escalator" but it could have also been "I ALONE CAN FIX IT." I featured the Big Giant Head on the Jumbotron with the small-handed homunculus driving the image; and Norm Ornstein's tweet about Leni Reifenstahl. The theme was set early; we just had no idea that this was something more than bad farce.

Today's edition of the local Idaho Press covered the front page with a print variant of the two-panel "How it started / How it's going" meme. Rebecca Boone's AP piece with a Boise dateline was the top story: Armed statehouse protests set tone for US Capitol insurgents. The digital version there (and the one in the Washington Post) has a photo of insurrectionists on parade in Lansing, Michigan, back in April. Our print version has a photo showing a pair of tactical cosplay locals with long guns at Idaho's Capitol on Wednesday. Awaiting orders?

The story talks about the rightwing uprisings at Oregon's capitol in Salem, and at one of the progenitors of uprising, Ammon Bundy, the issue of melon-farming, rangeland and cattle-abusing Cliven Bundy. Now claiming Idaho as his home, A. Bundy has made scenes at public health districts as well as the statehouse, none of the latter as memorable as having the Idaho State Police wheel him out and across the street in an office chair.

Also above the fold in the paper is the slightly pathetic story of Josiah Colt, local boy gone bad, now featured in scenes from the insurrection, all over the intertubes, monkeying his way down from the Senate gallery. (Photo in previous item.) "Trump won that election," Colt shouted with his fist in the air, from the desk of the President of the Senate where Vice president Mike Pence had been presiding in a joint session of Congress just a little while earlier, along with the next two members in the line of succession to the presidency. In addition to his confusion about the actual, certified electoral results, Colt imagined himself in the House chamber, and sitting in "Nancy Pelosi's chair" to make his proclamation, in his self-recorded, voluntary confession. It's not a good reflection on Idaho schools that the he couldn't tell the difference between 100 desks and 435 seats. In addition to his associate degree from the College of Western Idaho, he put in two years as a Mormon missionary, and was able to acknowledge wrongdoing. Unlike some people we know.

"I recognize my actions that have brought shame upon myself, my family, my friends, and my beautiful country," he told Idaho News. "In the moment I thought I was doing the right thing. I realize now that my actions were inappropriate and I beg for forgiveness from America and my home state of Idaho."

It's not a high bar, but at least Colt showed himself to have considerably more moral character than Trump, in the space of just a day or two. The ability to recognize and admit a shameful transgression is no small thing, it turns out.

Congressman Adam Schiff (CA-28), the chairman of the House Intelligence committee, gave his inside account of the experience on Wednesday, too: What It Was Like To Be There, What It Means To The Country, And Where We Go From Here. You should read the whole thing. Here's part of it:

“For the many of us that were present in Congress during 9/11, it brought back a flood of painful memories, but this time, the damage to our country was self-inflicted, and this time, we are far from unified as a result.

“The storming of the Capitol was an act of insurrection, intended to disrupt the most fundamental act of our democracy – the peaceful transition of power. ...

“When I spoke on the House floor in opposition to [the] challenge to the votes of millions of Arizonans, I wanted to emphasize that these Republican objectors were violating their oaths to defend the Constitution, regardless of the outcome of their objection, and doing grave damage to our democracy:

‘Nor can we console ourselves with the intoxicating fiction that we can break that oath without consequence because doing so will not succeed in overturning the election. An oath is no less broken, when the breaking fails to achieve its end.

‘We must be mindful that any who seek to overturn an election, will do injury to our constitution, whatever the result. For just as the propagation of a dangerous myth about this election made this moment inevitable, our actions today will put another train in motion. This election will not be overturned, but what about the next? Or the one after that?

‘What shall we say when the our democratic legacy is no more substantial than the air, except that we brought trouble to our own house, and inherited the wind.’

That was a short while before the "wind" of the mob of the foulest president this country has ever known broke into the chamber.

“Donald Trump lit the fuse which exploded on Wednesday at the Capitol. Every day that he remains in office, he is a danger to the Republic, and he should leave office immediately, through resignation, the 25th Amendment or impeachment. He should have been removed from office a year ago when the House impeached him and we proved in the Senate trial that he abused his power to cheat in the election. During the trial, we warned that if left in office, he would try to cheat his way into staying there. As I said at the time, the odds that he would do so again were 100 percent. ...

“Yet even when he’s gone, the evil he has perpetrated will live after him. We can fortify the defenses of the Capitol. We can reinforce doors and put up fences. But we cannot guard our democracy against those who walk the halls of the Capitol, have taken an oath to uphold our Constitution, but refuse to do so.

“The work to repair and defend our democracy has never been more urgent or daunting. But we must never back down from this sacred task. I know I won’t.”