It's been a long, long time since my "Sporting" channel included something about football (or "soccer" as we call it over here, mostly). 2006, 2011, 2015... and then some golf?! But here it is on the verge of northern winter in 2022-23, and they're playing in smaller than, but much richer than Connecticut, Qatar, where the temperature this time of year is a bit less than drop-dead. (Fun fact: Qatar is the smallest country ever to host the FIFA World Cup. What will they do with 7 new stadiums afterwards?)

Everyone needs help pronouncing the name of the country, it sounds like. The NYT interactive doesn't make it sound that hard to me (not nearly as hard as getting Flemish right), but how would I know, really? Kind of equal emphasis on the two syllables, not too hard on the glottal "K" sound to start, and give a little gutteral trill at the end, right? The Fox News choice is quintessential: they're going with a bracingly wrong answer, ending with a piratical "arrr." Sky Sports/SBS Australia guy sounds it like CAT-tuh.

The US is still alive in group play, with a must-win match against Iran tomorrow, and our US Soccer Federation thought flying a non-Islamic Republic version of their flag for a day would be a nice show of support for protesters against the regime? Oddly enough, Iran state media were not amused.

“By posting a distorted image of the flag of the Islamic Republic of #Iran on its official account, the #US football team breached the @FIFAcom charter, for which a 10-game suspension is the appropriate penalty,” Iran state-aligned Tasnim news agency wrote on Twitter on Sunday. “Team #USA should be kicked out of the #WorldCup2022.”

If only we had some body to arbitrate such disputes, say a United Nations High Commission for Human Rights? Named Volker Turk. There is such a person, and says there he said Iran is in a “full-fledged human rights crisis.” Then maybe the US could have a coach from Germany, named Jürgen Klinsmann, who would smooth things out by saying how it's just their culture to work the referee, ha ha.

Rory Smith covered it on-site, but I can't find his emailed "World Cup Briefing" on the NYT site to link to it. Cut to the chase (after his lede that Klinsmann "of course, was wrong").

"It is impossible to know exactly what Klinsmann meant — who are we to judge the intent of a man’s soul? — but there’s a good chance that, should he keep his promise to explain his statement to Queiroz, he will point out that his error was in clumsily implying that Guatemala and Iran are somehow unique cases, the only places in the world where players will do whatever they can to win. That would be wrong. Trying to gain an advantage however you can is one of those things that unites players from across continents, and so it should. This is a professional sport, not a hobby. They are there to win." 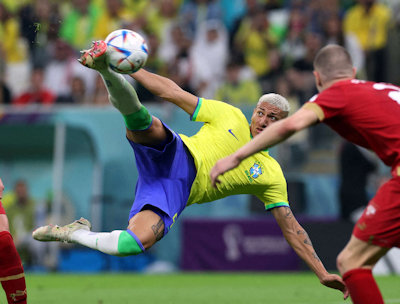 So yeah, everybody will keep working the refs, flopping at non-fouls, and getting genuinely hurt by the real and copious fouls. I see Brasil's incomparable star, Neymar, is out for today's game against Switzerland, for example, which is not to say you should break Rule #1, which is ALWAYS WATCH THE BRASIL GAME. You might see the GOAL OF THE TOURNAMENT. (So far.)

And for dog's sake, don't anybody go crazy if your team loses. It's not worth burning a car. Or even a scooter. If you're from Morocco, with its first win since 1998, there's cause for celebration. 2-0 over Belgium!

Consider channeling your inner Japan fan instead, responding to the disappointing loss to Costa Rica by pulling out blue trash bags, and cleaning up the stadium.

"In the return of a postgame ritual that is being met with widespread astonishment at this year’s World Cup, a group of Japanese spectators, who only moments earlier had been deliriously singing for their team, began meticulously cleaning the stands at Ahmed bin Ali Stadium, picking up trash scattered across the rows of seats around them."

(Not all Japanese, by the way; Nagisa Amano, 23, from Yokohama got her name in the paper by saying she didn't want to. And besides, "she had heard of instances in Japan in which stadium workers had been forced to reopen garbage bags packed by overzealous fans in order to separate materials for recycling," and maybe "some people are joining that group to clean up just to enjoy being in the spotlight.")