I found the "Inside Idaho" page on Standards to be a useful starting point in 2006, but I'm no longer seeing that page. There's now an Idaho Geospatial Office, with an index of Planning and Standards that's not it. The Department of Water Resources index for Idaho GIS data.

Anyway, I thought I might improve and update the "standards" presentation from back then. This treatment elides references to the particular data Inside Idaho provides and offers some reference links. (7 years (!) on, some may be stale. Let me know.)

The general topic of map projections is nicely explained and illustrated on this nationaAtlas.gov page. The USGS describes, illustrates and compares 17 different projections against the best (but not the handiest) model we have: the globe.

The Idaho Transverse Mercator (IDTM) projection is the Idaho state standard, providing for a single zone to cover the whole state. Wayne Valentine's original proposal for IDTM provides detailed background and links to current projection parameters, including the Inside Idaho page with IDTM projection parameters. 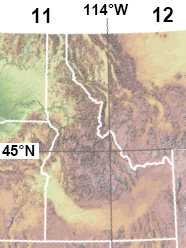 Some federal entities maintain data in a Geographic Coordinate System. The geographic projection creates a rectangular map by spacing the lines of latitude and longitude equally.

As used here, a "datum" is a set of constants specifying the coordinate system for calculating the location of points on the Earth. See the National Geodetic Survey's FAQ for more information about datums.

Most data are available referenced to either NAD27 (North American Datum of 1927) or NAD83 (1983). Refer to the metadata for a given theme to determine the datum.

Chuck Taylor's Toolbox has a converter for Geographic (degrees) to UTM coordinates with reusable javascript code. The web form uses the WGS84 datum (similar to NAD83), but his Java applet has a huge selection of datums that can be used, and compared.

GIS data sets are typically large, and comprise multiple files. They're typically bundled and compressed into a single archive. One common compressed format is a gzipped tar ("tape archive") file, ".tgz" Free and low-cost utility software for handling these are available from many sources. See northpark.edu, datacompression.info about.com, or PCMag.com, pages for more information.

A coverage is a proprietary vector format used by ESRI software. Coverages are the original storage format for ArcInfo. Coverages are a collection of files located in multiple directories.

A shapefile stores non-topological geometry and attribute information for the spatial features in a data set. A shapefile consists of at least 3 and possibly more files:

The July 1998 ESRI White Paper describes the required elements of the format in technical detail.

The ESRI E00 interchange data format allows all spatial and descriptive information for vectors and rasters to be combined into a single ASCII file. The file can be used to move themes into and out of ESRI software.

The ESRI data format for storing raster data that defines geographic space as an array of equally sized square cells arranged in rows and columns. Each cell stores a value representing a geographic attribute (such as elevation) for that unit of space. Grid cells are referenced by x,y coordinates.

JPEG2000 provides international standards that extend the Joint Photographic Experts Group (JPEG) image format (.jpg) with wavelet compression that offers both lossless and lossy compression, with better image quality at smaller filesizes than .jpg. The format provides for metadata (such as geolocation of the image) but does not specify GIS explicitly.

A world file (.tfw) accompanying a Tagged Image File Format (TIFF) file contains spatial information associated with the raster image. These are used for USGS Digital Raster Graphic (DRG) data (e.g. topo quads). The world file contains the ground coordinates of the upper left pixel of the TIFF image (the [1,1] or [0,0] pixel, depending on convention), scale and rotation information. World files do not contain projection and datum information.

The Topologically Integrated Geographic Encoding and Referencing (TIGER) system was built in 1995 as a proof of concept of a basic Web mapping application. From its FAQ: "It was never intended to be a general purpose mapping application to fill every mapping need. We show U.S. maps only. We've had extremely limited resources since then to add improvements. We will make incremental improvements as resources permit...."

In collaboration with private contractors, the Census Bureau is developing a new service, the American FactFinder.

The USGS provides the free dlgv32 Pro viewer for raster, elevation, and vector datasets in many formats.

Digital Orthophoto Quads (DOQs) are aerial photographs that have been rectified to have the scale and geometry of a map, and joined or cut to cover the same area as USGS topographic map quadrangles. The native format of these files is a single ban-interleaved-by-line (BIL) file with a keyword text header.

The dlgv32 Pro viewer can read this native USGS format. The Washington State Geospatial Data Archive has scripts to enable viewing DOQs in ArcView and Arc/Info.

Note: Inside Idaho listed (.sws, .ses, .nws, .nes) suffixes, but I wasn't able to find other references that had those.

"Live" data and maps provide interactive content, either via map images generated from data on the map server and delivered to a web browser (or other program), or compressed vector data streamed to you and displayed in GIS software on your computer.

Google Maps use javascript and server-generated map and photographic imagery to create interactive maps, with an available Application Programming Interface (API) that allows 3rd parties to develop location-based applications based on their service.

Google Earth is a standalone application that "puts a planet's worth of imagery and other geographic information right on your desktop" with compelling 3D imagery.

ESRI's ArcIMS delivers dynamic maps and GIS data via the Web, to browser-based applications, their ArcGIS Desktop, mobile and wireless devices. Data are delivered either as server-generated map images or in compressed vector format to client-side GIS software.

The Open Geospatial Consortium, Inc. (OGC) is a non-profit, international standards organization for geospatial and location based services. Its Web Map Server interface specification (WMS 1.0) allows map servers to create and send map imagery over the Web as GIF, PNG, or JPEG images such that client software can overlay and display multiple maps from multiple servers (and vendors). The Clearinghouse pools efforts from some large organization, but their web presence makes it feel somewhat defunct at this point. (No entries in their FAQ under WMS or Clearinghouse...) Maybe the 2001 CAP Grant has run out?

This cooperative venture between Microsoft Hewlett-Packard, and the US Federal governemnt was launched with worldwide images in 1998. It has bifurcated to TerraServer-USA and terraserver.com, from the company that which originally supplied the imagery for non-US locations (then Aerial Images, Inc.).

A9.com Maps is focused on streets and driving directions, adds "blockview images" with user-supplied photographic views at various locations. MapQuest is likewise about navigating by street, and advertising.