What goes around comes around

The question I have after re-reading Adam Serwer's chilling piece in The Atlantic from last Wednesday—The Cruelty is the Point: Who is man—or woman—enough to step up and bring the Republican party back to a modicum of decency? Susan Collins seemed unlikely (but maybe) until she hit rock bottom with her blithe assessment that "it appears to be a very thorough investigation." (That was before she clarified that she had "not yet finished going through all the materials.")

And just last Thursday morning, the man who stopped the tide of history for just a moment, retiring Senator Jeff Flake of Arizona, said he too thought that the investigation was thorough. Looking at what little there was to see, he said "we've seen no additional corroborating information."

Don McGahn made sure of that.

But just to make good and sure, they kept the one and only copy of the FBI report in a basement room where senators had to come and get a glimpse in shifts. So little time they had to have it read aloud to them, in groups.

As a plot device, any good director would have thrown this out as being too ridiculous. No one would believe it! The U.S. Senate? A Supreme Court nominee? A room in the basement? You cannot be serious.

Collins also had to ignore the rather impressive list of Kavanaugh's lies under oath to get there. And to pin all of her own plans for the future on the "fervent hope" that he would turn out to be a different person than he just showed himself to be on Thursday morning.

Lisa Murkowski came through (never mind her "present" to keep the tally undisturbed by Steve Daines' "absent" to attend his daughter's wedding), quoting the code for judicial conduct that requires acting "at all times in a manner that promotes public confidence in the independence, integrity, and impartiality of the judiciary." It is a "really high" standard, and one that Kavanaugh failed to maintain last week.

But she was the only one to express doubt and break ranks. On the Democrat side, perhaps with the 50+Pence arithmetic and his West Virginia campaign in mind, but insisting it was not based on politics, and only on the carefully controlled diet of facts he'd been fed, Joe Manchin III stared down distraught protesters and put in a Yes vote to lend the faintest whiff of bipartisanship to the affair. 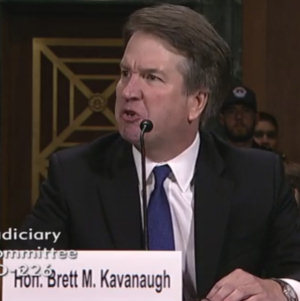 Before his McGahn-induced, fraudulent WSJ op-ed walk-back, we heard from Kavanaugh himself, unplugged, in Biblical terms, his partisan rancor unmasked, just in case his work history for Ken Starr and George W. Bush hadn't made his bona fides crystal clear. (Never mind the "presidential privilege" Trump exerted on W.'s behalf to keep most of the secrets.)

As Kavanaugh said, "the consequences will be with us for decades." And that epitaph of judicial temperament, modesty, and impartiality: "What goes around, comes around."

"Due process" was the cry from the gallery of white men, indignant at the challenge to their authority. (As opposed to the favorite mob chant of "Lock her up" at the next Trump rally.) Kavanaugh's confirmation hearing "presented Christine Blasey Ford’s sexual assault as a long-familiar dialogue between her facts and his resume. As framed by him, the question was whether someone as valuable and accomplished as he would be denied advancement over something as dubious and negligible as the abuse against Dr. Blasey," Catharine A. MacKinnon put it in her contribution to the New York Times' one year retrospective on the #MeToo movement.

"Courts are typically more hidebound and less nimble than culture, although they are embedded in it. The norms of rape culture still infuse much existing law. Rape law largely uses a “consent” standard often consistent with acquiescence to unequal power. Sexual harassment law’s equality standard is unwelcomeness. Criminal law’s burdens of proof, difficult for survivors to meet, are often imported, tacitly or explicitly, into civil and administrative processes as standards for the credibility of the victim. Statutory law against discrimination has a statute of limitations that is measured in months, before almost any victim of sexual violation is past trauma, far less beyond post-traumatic stress. No movement to change it exists in Congress. ...

"#MeToo may be the first change toward women achieving human status since the vote. Indifference to sexual abuse contributed to electing this president, an election that in turn fueled the #MeToo movement against that indifference with a rage that the events surrounding Judge Kavanaugh will likely continue to focus and accelerate further."

Howard Zinn's take on the Supreme Court and its overestimated importance, from 2005, when John Roberts had just been made Chief, and Harriet Miers' bid for Sandra Day O'Connor's seat had been rejected for a failing questionnaire and stuff, and Samuel J. Alito had been nominated but not yet confirmed might provide some small comfort, and a reminder: Don't Despair about the Supreme Court. "It would be naive to depend on the Supreme Court to defend the rights of poor people, women, people of color, dissenters of all kinds." This had just happened:

"A district court judge in 2004 ruled that the detainees held in Guantánamo for years without trial were protected by the Geneva Convention and deserved due process. Roberts and two colleagues on the Court of Appeals overruled this."

And the Supreme Court, with Roberts recused, and Scalia inappropriately unrecused (given his prejudicial statements ahead of the case), reversed the Court of Appeals in Hamdan vs. Rumsefeld, 5-3. But here it is a 12 years later and there are still dozens of "detainees" deemed "too dangerous to transfer but who cannot be tried in a court of law." (Perhaps Justice Kavanaugh will feel solidarity for the due process they've been denied and put in a good word some time.) What Zinn said:

"[K]nowing the nature of the political and judicial system of this country, its inherent bias against the poor, against people of color, against dissidents, we cannot become dependent on the courts, or on our political leadership. Our culture—the media, the educational system—tries to crowd out of our political consciousness everything except who will be elected President and who will be on the Supreme Court, as if these are the most important decisions we make. They are not. They deflect us from the most important job citizens have, which is to bring democracy alive by organizing, protesting, engaging in acts of civil disobedience that shake up the system."