Waiting to be Seduced by the Don

It's our dress rehearsal for Mozart’s tragic opera Don Giovanni and I’m standing in the dark stage left behind a fake wall meant to cover the steps leading up to Lady Elvira’s balcony. I’m a little over-age to be singing in the opera chorus but what an opportunity! I’ve been cast last minute as Donna Elvira’s maid. Our Elvira enters before me sweeping up the stairs in a gown wide enough to make the commodious soprano herself seem small.

But before she reaches the top of the stairs she stops. Her gown’s train is caught. The director shouts. I crouch squeeze up the steps below the railing line feeling the whole contraption vibrate with my weight. I reach up into the dark lift her tulle from the platform’s various splinters. As soon as I’m down a stage hand dressed in black creeps up the steps with a roll of gaffing tape and covers the splinters. Unhappily he has also covered the white safety tape. I’ve been told to climb up in the dark then back my way on and off stage. Did I mention my night vision problem?

“Walk up to the top of the stairs play the scene,” says Marc the stage director. After singing a few short phrases with the rest of the women’s chorus in a peasant wedding scene, then pantomiming a drunk servant passed out in Don Giovanni’s garden, I’m now shifting to Lady Elvira’s maid who is wooed by the shameless Don for one short aria with two verses accompanied not by the orchestra but a mandolin. Not just any mandolin either but my own plucked by our assistant conductor. Donna Elvira has agreed to meet the Don downstairs. She moves majestically past me on her way to the stage. There’s more recitative in Italian so I’m counting measures until her exit and then it’s my big moment alone with the Don. 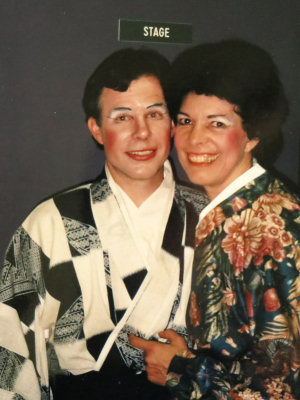 Not exactly Don Giovanni,
but the same company.
The Mikado, 1996

The music begins and I forget the spongy stairs and wobbly railing. I hear my mandolin playing a simple country love-song. How could I let that wonderful instrument gather dust beside my piano all these years? And here I am in the best seat in the house. From where I stand I can see most of the backstage; I watch a stage hand unwrap two pieces of takeout chicken from their foil and place them on a platter for Don Giovanni’s dinner with fate in the last scene I’m fluffing my hair taking my last deep breath. I’ve forgotten my maid’s cap and can’t run to our upstairs dressing room because I will miss my cue. I walk up the stairs too quickly back into the balcony during Don Giovanni’s first verse.

Do it over the whole thing the director calls out and I do of course moving down quickly then slowly up the stairs listening for “De vieni de vieni” don’t move. I step into view on the balcony for the four measures between verses. I’ve worked out a storyline for myself. My mistress has just left the house. I’m attracted by a beautiful male voice in the street below. He’s a bass which is never a good sign (the hero is always a tenor) but I apparently can’t get time off to attend opera so I don’t know that.

He sings something about how he’s in need of comfort. I’m touched. I don’t realize that he is an infamous playboy who had his servant lure my mistress out of the house so he could have a go at me. By the time I’m on the rocking rolling platform he’s speaking of lovely lips a good heart. I realize he means me ME! When he starts his last line with “lasciame” whatever that means I’m moving into the spotlight then lean over the balcony as he runs up toward me; I smile ecstatically then O no spot ruffians with clubs approaching his direction. I frantically motion to the Don (danger danger!) and run off backward to the steps turn exit down while reminding myself don’t touch the railings. Ignore the floor rippling like a cheap apartment in an earthquake. Don’t miss that top step.

Our chorus includes an air conditioning specialist, a baby doctor, an engineer, a construction manager, psychology instructor at a Bible college, a surgical nurse, an optometrist, and a farmer. We have one former sideman who sang in several Hollywood movies (he came back to help with a family emergency stayed to become a stock broker). We include a prosecuting attorney and at least one secretary. We’re mostly middle aged. We have conversations that stretch from one rehearsal to the next show following show last year and next year. Just before this rehearsal we were called to the Green room. Someone complained about the condition of the stage and stage crew. An unnamed member of the chorus spoke of ineptitude. The chorus master apologized. Next day the director of the opera company made more apologies and promises that such an incident would not recur. A rule now: no remarks about the stage crew or orchestra.

Meanwhile programs have been printed and sit in boxes in the lobby. The advertisements for Don Giovanni are titillating. “Will the world’s greatest lover get burned?” I have time for a quick visual check: good the balcony steps now have white safety tape. I made an apple crisp that waits in the van for our cast party and the show moves quickly as it should.

Jeanette Ross, February, 1999, shared with the Boise 150 Sesquicentennial project in 2013.