Lots of food for thought in Rep. Sean Casten's (IL-6) Twitter thread about our present health crisis. Some context in the May, 2017 Vox post from David Roberts, Donald Trump and the rise of tribal epistemology, which, I imagine I read back in the day, but it's been a hell of a four years. I looked, and don't see any contemporaneous mentions. There was this just-into-2017 post, The year of living dangerously, with Charlie Sykes' come to Jesus moment, and a link to Steven Levitsky's and Daniel Ziblatt's op-ed, Is Donald Trump a Threat to Democracy?

Yes then, and yes now. My pithy summary in the lede 4½ years ago was "Tribal loyalty trumps what used to pass for principle." Just for starters. As Casten boils it down, "while truth is universal, our perceptions of truth are increasingly informed by our 'tribe.'" The topic today is the danger tribal loyalty poses to public health.

"The germ theory of disease, the science of epidemiology, the mechanisms of vaccines, the ways to stop the spread of airborne pathogens... these are all proven, knowable truths. 'It will magically go away' or 'Dems just want to shut down the economy' is tribal epistemology."

Members of the *rump wing of the Republican party are less likely to wear masks and less likely to get vaccinated. (And, weirdly, the fact that Dear Leader got vaccinated himself doesn't seem to penetrate the bubble.) "More perniciously," Casten writes, "they have assumed the rest of the world shares their moral code. In the words of @fakedansavage, when someone accuses you of something you've never thought of, they are telling you what they are capable of."

"Trump was the first President (at least in my lifetime) who not only made no effort to represent those who didn't vote for him, but actually wished them harm. If you are capable of that process, you come to assume your political opponents wish the same of you.

"You're only closing restaurants to slow the economy or to hurt our guy's political fortunes" is the kind of thought you only think if you would do the same in the reverse situation. We don't. But that idea infected a large bloc of a major political party.

"Let's be very clear: the COVID-19 virus doesn't care who you voted for. Neither do those who are trying to stop it's spread. Every one of us as a friend, neighbor, loved one, etc. who voted differently than us. We don't want any of them to die.

"But if you thought it was OK for Trump to wish suffering on his opponents, you may assume that his opponents wish the same of you. So a politician with a D after their name encouraging you to get vaccinated can't be trusted. It's why we need R leaders to put science first."

Real leadership is a matter of life and death, in other words.

Tweet #16 in the thread has a datagraphic augmenting yesterday's post here, with national numbers. No vaccine is perfect. But the nationwide stats in this experiment we're running currently show that "you are 8x as likely to get COVID if you're unvaccinated, 25x as likely to go to the hospital and 25x as likely to die." It's slide 4 of 25 in the CDC presentation, "Improving communications around vaccine breakthrough and vaccine effectiveness," dated yesterday. 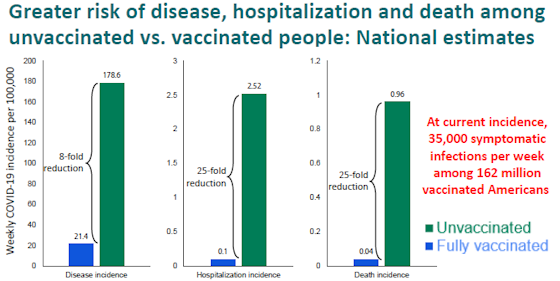 That's the current estimate of scientific truth, subject to revision, correction, review, and so on, as ever, while the SARS-CoV-2 virus and its threat continues to evolve. And here's the latest snapshot of how the infection of tribal epistemology is playing out in vaccination rates, from Charles Gaba, offering "healthcare policy data, analysis & snark" on his ACASignups.net. (Sample snark in his headline for a July 23 update: "I sent you a radio report, a helicopter, and a guy in a rowboat. What the hell are you doing here?")

Casten cites the analysis part, Gaba's latest weekly update of Covid Vx levels by county. Apart from the stark message in it, it's a masterful presentation of a gigantic dataset, 3,144 US counties in 50 states plus D.C. The original on his site is 1260 x 1440px, and definitely worth a look. Zoomed out to a bare 560px to quote here, the "big picture" with axes of 2020 Trump Vote % (horizontal, augmented with the red/blue shading) vs. Percent of total population fully vaccinated, the impact of tribal epistemology is stark.

Also, if full herd immunity (to protect the youngest among us, and those with health compromised such that they cannot safely be vaccinated) requires 85% rate, we still have a long, long way to go. An impossibly long way, given the state and ossification of our politically addled minds. In addition to the radio report, the helicopter, and the guy in the rowboat, we need to be broadcasting 24/7 in some locales that TRUMP GOT VACCINATED. Which, would still be dismissed as a commie plot. 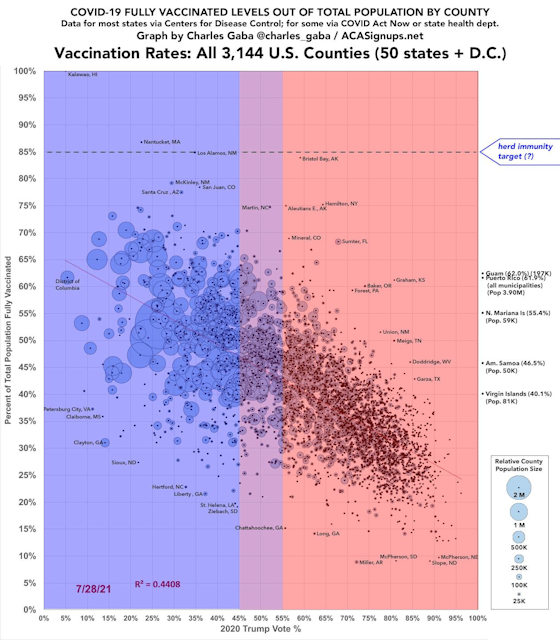 Gaba added a short thread from the congressman's mention to say that he'd looked at (and graphed) county-level vaccination rates versus "several non-political metrics," and found that none of Median household income levels, education levels, population density, or "urban/rural" status was as highly correlated as the vote in the 2020 presidential election. As he puts it, partisan tribalism isn't the only factor, it just seems to be "the clearest and most blatant one."