As I crossed the bridge over the river and entered the campus Friday I could hear a commotion, one loud voice with crowd mutter behind it. I could see a crowd of bystanders, too, just where I expected them. Two weeks earlier the Boise State Secular Students organization had agreed to set up a table in the quad to share a happy coincidence: the end of Banned Books week and this year's Blasphemy Day. They intended to display books that have been common on banned books lists, hoping other students would stop by and ask what's wrong with Huckleberry Finn, for instance. I agreed to come by and read from a couple of "banned books" from my own library.

The murmer turned out to be a long line of frustrated students subjected to a constant harangue. Two older men, not appearing to be students, had set up a portable platform and were taking turns insisting that those before them were condemned by God for supporting evolution and same sex marriage. They positioned themselves directly across the sidewalk from the BSSSA table, where several club members had set out books and were attempting to converse. It was quite a din. Two police officers (or hired security?) stood by to keep order. Several of the students were attempting to engage the speakers but they were easily shouted down. These men were practiced, and took turns to give each other a rest.

How long had this been going on? "A long time."

"All right then, watch this," I said and opened one of my books, May Sarton's journal, The House by the Sea. I stepped in front of the podium and shouted over the voice of the podium speaker, waving my book. "I am hear to share the gay agenda!" Security motioned me out of the passerby path; someone brought me a plastic milk crate. I turned it over, telling the crowd I wanted a turn. The speaker, Sean, kept shouting. He shifted to attempting to engage with me and warn me the crate was unsafe. Of course it was, that was the point; when I stepped up it bent but did not buckle. 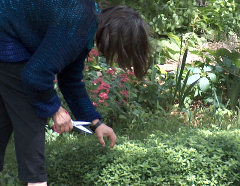 Sean wasn't giving up, desperately asked my name. I silenced him (I think I said "Shut up." Shame on me) and instead I began reading May Sarton's reflection on the pleasures of living alone with her own thoughts. I used my best dramatic voice, leaning into her poetic evocation of where she lived and how. At the end I said, softly, into total attention, that this was the gay agenda and it is very like our own, isn't it? The students broke into applause. I went back to the student table and had several good questions. One young woman asked what I thought might change either of these two men. I had to say honestly that they would have to find something with more emotional satisfaction than intimidating well-behaved young people. This, it was clear, was giving these men great pleasure.

I interrupted the noise from the podium twice more, each time snugging my upturned crate a little closer to the podium, with eye contact and small smile at the speaker. By now it was easier to bust in. I stood silently on my precarious perch for a few moments, a woman old enough to be their mother, giving them time to do the right thing. Reluctantly. Once I read from Howl by Allen Ginsberg, editing the naughty bits, and then from the final speech, quoting the words of Jesus, in Upton Sinclair's book, The Jungle. Sinclair reminds us that Jesus condemned the religious bigots of his day and spent his time attending to, eating with and listening to the needy. I didn't say it out loud but my audience understood which side of the sidewalk Jesus was likely to take this day.

At my second approach to Sean, he appealed to the audience and said he'd like to have some applause, too. Would they please applaud him? Crickets. I thanked him warmly for giving me time, and read, then thanked him again when I was done, for his respectful attention. Huge applause.

One student stepped out as I was leaving. She held a handmade sign saying something like "be your own god." She sat silently, holding her sign to us, from just in front of the podium. Applause, cheers.

A version of this story was published in the Secular Idaho newsletter in 2011.