It's a White Christmas, alright. I've lost track of how many days it's been since this dense, featureless inversion settled down over the Treasure Valley, and the wind stopped. Seems like the dewpoint and temperature haven't varied from the low 20s since, and the hoarfrost has grown to an inch, two, longer. Imagine a chainlink fence outlined with rime ice. Days pass. The fence is now almost solid, the openings almost closed up from each side of the diamonds. 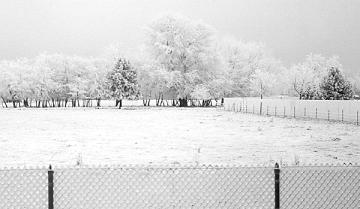 There is dark, dusk, and a medium gray defining the "day." Nothing to hint "morning," "midday" or "afternoon," much less in which direction the sun might be. In the midst of this "day," the branches and needles of trees and shrubs are each an astonishingly intense white, almost silver. Counterpoint is gray, black, dark evergreen branches, and the omnipresent and formless cloud of the sky, making the white seem even whiter. All with nothing you could call "daylight." Hard to imagine. Everything's white now, as if it had snowed, but it hasn't. Within the trapped air, the temperature drop with elevation is palpable. The river's course is warmest. Climbing the low bench is easing into the underside of the cloud, where the trees reach up and pluck the icy moisture out of the air.

Climbing into the foothills, the fog thickens, closes around you, the hoarfroast thickening into solid coats on everything. 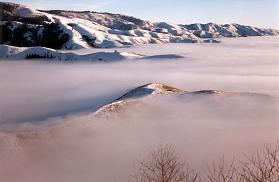 Somewhere ahead, you won't know until you break through it, lies the top of the cloud. It's a warm winter day and the sun is spread luxuriously over a fifty mile wide sea of cold fog, filling the space betwee the Boise Front and the Owyhees. Half a dozen cities and a quarter million people are invisible, silent, hidden. Snow-dusted brown ridges reach down into it the impenetrable mass, as the fog reaches up the gulches and is teased apart by sunlight, thousands of feet above the river.

Looking back at NOAA data, it lasted a week, dropping out of the mid-30s during the day of Christmas Eve, briefly getting back to 26F with a little foggy snow on Christmas day, and then staying between 21 and 25F right through New Year's Eve. That evening, some light snow fell, and the cloud started to break up. Over the next few days, we had some real weather, with a couple inches of snow (half a foot in the mountains), and temperatures ranging from overnight lows in the teens to highs in the 30s.

In this satellite image (visible light, from

http://www.goes.noaa.gov/, at 2pm MST on Dec. 30), you can see the extent of the inversion, covering the Snake River basin from the center of southern Idaho, across to Boise and north to almost the Washington Border. My view was about in the middle of this, with the Owyhees across the short dimension, in the SW corner of the state, and a hundred miles of cloud looking SE or NW. (The panhandle is about 45mi across for a scale reference - each pixel is about 4 or 5 mi. square.)

Here are some more of the pictures I took during this spectacular weather event. They're linked to larger versions.

For more about the phenomenon of inversions, I recommend this student project site at Michigan Tech.